Independence Day is coming! But while you may be excited about the Fourth and fireworks displays, your pooch probably isn’t. Most animals don’t like the cacophonous riot of sound and light and some are downright terrified of them. Let’s look at doggie anxiety and Independence Day. Fireworks can cause severe anxiety in dogs (and other pets), causing them to flee. If you have plans to go out for the 4th of July and want to take your pupper, you may want to rethink that. A spooked pooch in unfamiliar territory is prone to flee, looking for safety.

It’s pretty easy to tell if your pupper is suffering from doggie anxiety. They may tremble or shiver, salivate, yawn, whimper, pant, or attempt to hide. Other, more undesirable, reactions include property destruction, soiling themselves/ inappropriate elimination, biting, blind flight, chewing, digging, even plunging through closed windows..

Animal control says there’s upwards of a 30% increase in lost dogs and cats during this time of the year. Unfortunately, most are not reunited with their humans. Take precautions to protect your furbabies this holiday season.

Prep a happy place. You can create them, and cover the crate with a blanket, creating an extra safe feeling den. Or maybe they like to hide under the bed. Make the room escape proof, dim the lights, and put on relaxing music or soothing nature sounds. Leave a chew toy or stuffed Kong with them for added comfort.

Exercise them earlier in the day. This will wear them out. Exhaust their energy before the fireworks will likely put them to sleep.

Use a Thundershirt. These vests apply soothing, constant pressure to help alleviate anxiety. 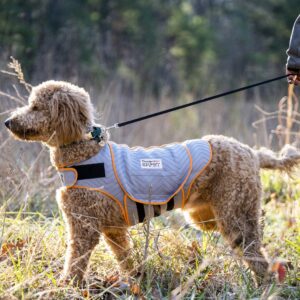 Consider sedation, and start a few days ahead of time. This ensures they get a mild buildup in their system, and if you’ve never used it, gives you time to adjust dosage.

Desensitisation takes time. You may consider desensitisation therapy as a longer-term goal, which involves gradually increasing exposure to traumatic stimuli to get acclimated to it. This therapy takes a long time in humans, who can anticipate the stimuli and its increase. It takes longer with animals, so it’s only practical as a longer-term solution. It is the best option, overall, since it changes the behaviour over time.

Don’t share the BBQ foods! Things like bones and corn cobs can get stuck in the digestive system and require surgical removal. Bones, too, can splinter, creating the extra danger of internal punctures. Other foods can be toxic. In addition, things like kebab skewers can cause injury. 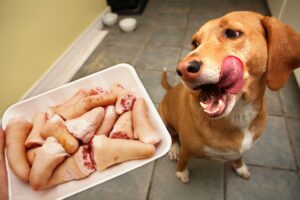 And not just foods! Other things may be present outside during a BBQ that may be dangerous, such as leaking antifreeze, sunscreen, citronella, DEET bug spray, or lighter fluid. Not only can fireworks be scary to your pets, but they may contain toxins like arsenic.

Fire and fur don’t mix. Make sure pets stay away from lit grills. Keep fireworks, sparklers, matches, and other firework accoutrements safely away from dogs and curious cats.

Overheating can be a concern in areas with high summer temperatures and/or humidity. Make sure your pets have access to shade and plenty of water. Clean up the yard. After the celebrating is done, be sure to check your yard/ property for fireworks debris. Dogs, and cats, tend to want to eat/ play with unusual things and fireworks debris certainly falls into that category.

If your dog is injured, or you think your pup may have ingested something toxic, then you need to get them to their vet or an emergency vet clinic if symptoms are severe.

Local resource for those near the Bay Area, California- Sage Veterinary